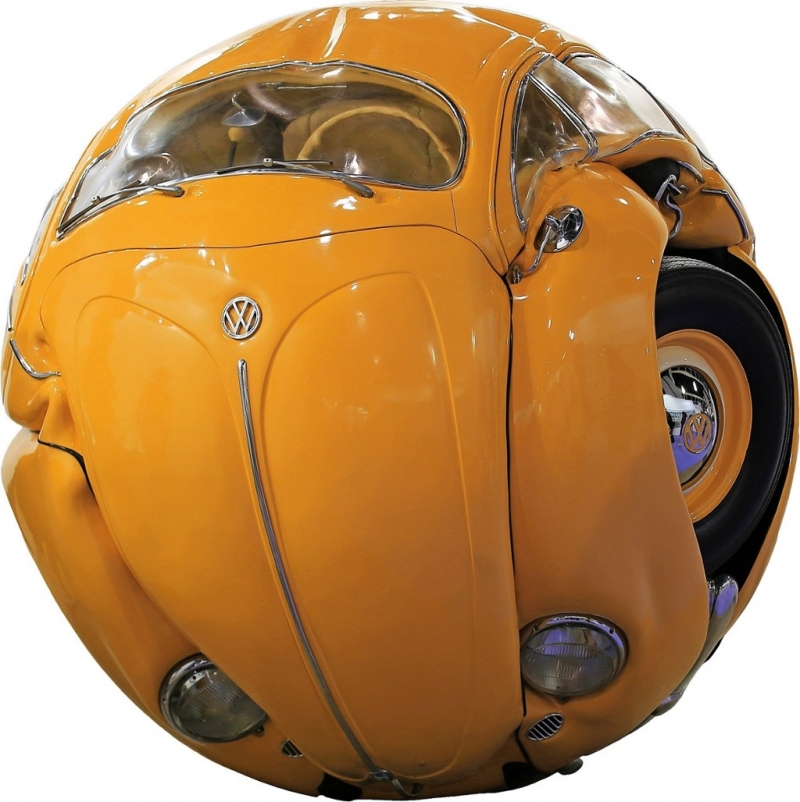 You saw many cars, but you haven't seen anything like this! The incredible sculpture shows a commercial product in an innovative way. An Actual 1953 VW Beetle Formed into a Perfect Sphere. This car was a piece of art itself, an exquisite piece of aut

You saw many cars, but you haven't seen anything like this! The incredible sculpture shows a commercial product in an innovative way. An actual 1953 VW Beetle formed into a perfect sphere. This car was a piece of art itself, an exquisite piece of automotive world, but this way it was made even more unique and unforgettable – though not functional, of course. The sculpture is made from real parts from a 1953 VW beetle, combined with aluminum and polyester shaped into a perfectly round giant sphere. It was created by Ichwan Noor, a 50 years old artist from Jakarta, Indonesia, who is a graduate of the Indonesian Art Institute, Yogyakarta. Our compliments to the teachers of this fine institution and to the artist himself, of course! This is one in a series of spherical and cubical vehicles by the artist, and he also works in a variety of other subjects including anatomical forms, though the artist's specialism is cuboid and spherical art. The significant operating principle here is deformation, where a familiar object is deformed into a spherical form, but retains enough of the essence of the original state.

There have been opinions that maybe this piece of art was inspired by the Bus Ball, created by ZZ Tops' Billy Gibbons. Make your bets!

Noor has actually rolled up five of the vehicles in his career. In a statement the artist said:

"The idea emerged from a personal perception towards objects that are products of a "transportation culture", which induces hints/signs of spiritual emotion. To behold a vehicle (car) is to have a "magical" (supernatural) identity. Sculptures represent the interaction between humans and the object realm, with strong spiritual tension that affects the subconscious, and that yields a new "animistic" attitude.

By combining the techniques of manipulation and substitution, the form of this sculpture tends toward realistic distortion, which allows new interpretations about the object (car), as a shift in perception that creates an associative meaning. The sculpture's visual form yields an impression of a sphere - the basis of all forms. The shape of a car is pressed onto the spherical form, producing a dynamic movement, a certain flexibility, but also fragility. It is a concept of "totems" that is embraced/believed by the people of today."

The spherical car is being shown at Art Basel, an exhibition for modern art that moves from Miami to Hong Kong and Switzerland. The sculpture was sold for about $88,000 according to the Japan Times.

The surreal exhibition is not Mr Noor's first time to work with a Beetle. He has previously built a cube-shaped Beetle.

This is an art that actually makes you think and wonder. Well done!

A Perfect Car for a Perfect Fall from RepoKar.com